Beyond the capabilities described in the “Vehicle Life-Cycle Management” page on this site, TrustCentral’s technology offers additional tools and capabilities that may be applicable for V2X, V2V and autonomous vehicles:

It is assumed that vehicles will be managed under its OEM’s PKI with an integrated Attribute Authority (AA). Such arrangements will result in multiple, siloed OEM PKI’s. This will likely also be the case with the infrastructure of multiple governmental entities.  Certification Authorities of the various PKI’s will be authenticated to extend trust one to another. Vehicles managed under one OEM’s PKI may be authenticated for trusted communication with vehicles and/or infrastructure and/or other devices managed by another PKI (e.g., that of another OEM, governmental entity, etc.).

The integration and cross-certification of separate infrastructure sources using PKI’s administered by independent government, states, cities, and possibly private businesses may be implemented. 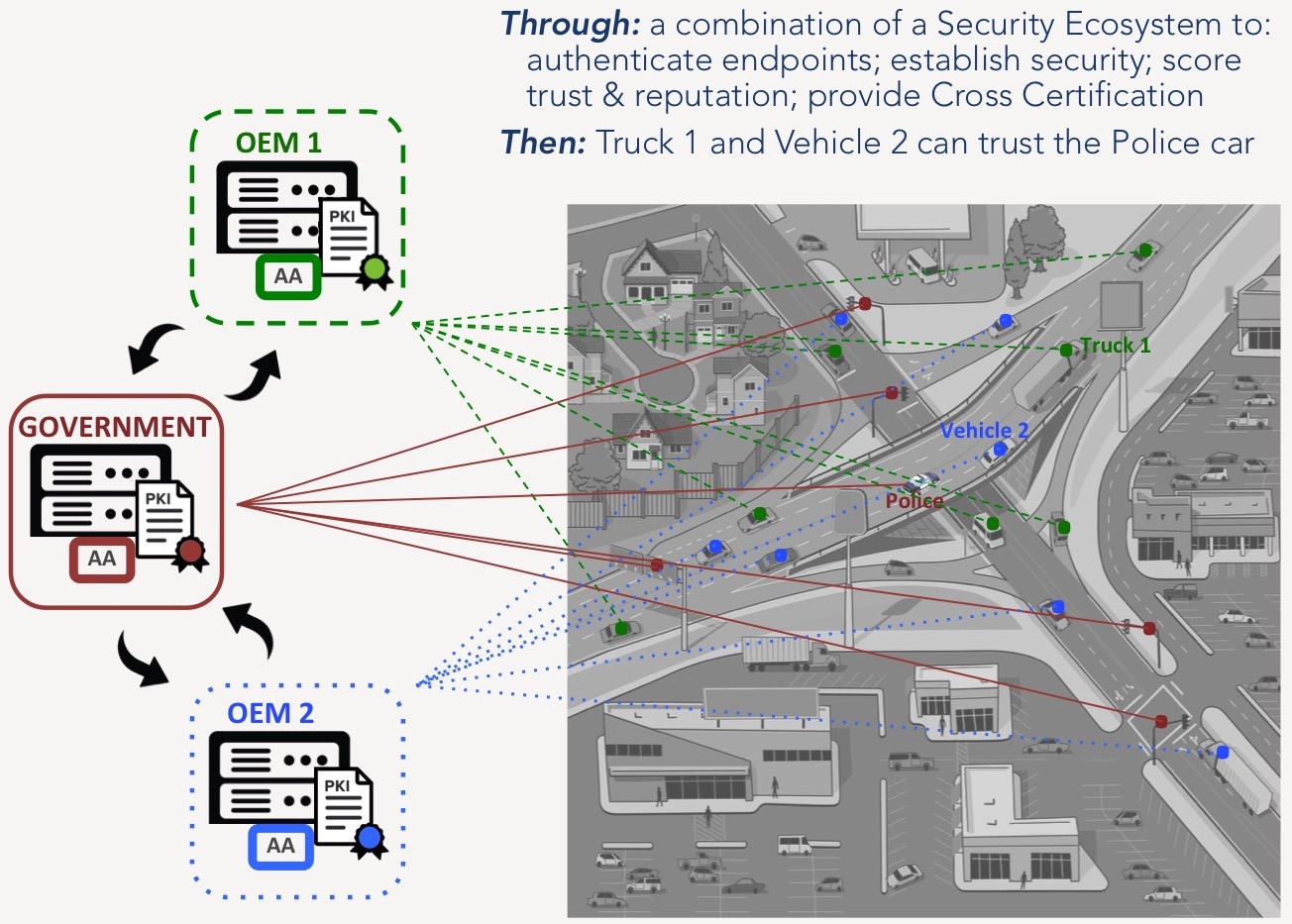 One of the technical challenges to be addressed by the automotive industry is the communication requirement to support V2V and V2X for autonomous vehicles. For example, the AECC (Automotive Edge Computing Consortium, www.aecc.org) describes itself and the challenges it intends to address as: “A consortium for driving the network and computing infrastructure needs of automotive big data. In the future, connected cars will typically not only allow for safer driving but also for smoother traffic flows and optimization of energy consumption giving lower emissions, which altogether will significantly improve the driving experience resulting in an environmental benefit. Those future automotive services will be expected to require a much larger data transfer capacity than used by connected cars today and to accommodate this, the current network architectures and computing infrastructures need to evolve. The consortium focuses on increasing network and computing capacity to accommodate automotive big data smartly between vehicles and the cloud using edge computing and more efficient system design.”

The AECC’s approach appears excellent and well thought out. TrustCentral’s technology may potentially mitigate the presently anticipated demand for network and computing capacity. Mitigating that need may reduce costs as well as the network and computing capacity to support anticipated needs. There are several ways in which the security ecosystem can support these efforts.

The authentication of vehicle and infrastructure identity integrated with secure communication lines, the authorization of devices including control of their privileges through the use attribute certificates, the determination of trustworthiness and reputation of vehicles, infrastructure, etc. ideally should typically not have to be completed by each individual vehicle-2-vehicle exchange nor should these activities have to fully depend on the constrained resources at the vehicle level. Rather (to the extend possible and practicable) such determination preferably could be done at the Attribute Authority-PKI level utilizing more powerful computational resources available to an AA as well as the higher speed networking resources in the cloud. Such an approach may provide for more efficient cross certification and authentication between AA’s of separate PKI’s.

For example, when examining the above diagram, one can observe numerous relationships between vehicles and infrastructure. If most vehicles need to communicate individually with many other vehicles to gain identity and other information about them, and particularly to authenticate those vehicles and determine their trustworthiness, the communication requirements and computation requirements at the vehicle-level could be considerable (the system’s use of trusted attribute certificates will, by itself, reduce computational requirements). Shifting a significant portion of those determinations away from vehicle-level resources to AA’s on the edge in the cloud (which can provide summarized, trusted data pushed to vehicles) may mitigate such demands.

In either event, as a non-managed vehicle presents itself, an Attribute Authority (AA) should be able to intelligently determine that vehicle’s location and be able to authenticate its identity certificate and/or group attribute certificate. Subsequently when that non-managed vehicle needs to establish V2V communication with any of the AA’s managed vehicles, the previously completed authentication/trustworthiness process need not be repeated. The AA should be able to immediately authenticate that vehicle to any of its supported vehicles as needed. As a result, demand on computing and network resources at the vehicle level will be reduced. (A comparable process can be applied to infrastructure.)

These procedures can become more efficient as AA’s learn to predict locations of vehicles. Ideally the AA should know the GPS coordinates of its managed vehicles and be able to determine their speed and direction. The AA should be able to determine locations of non-managed vehicles based on those vehicles’ prior interactions with the AA’s managed vehicles. An AA, having far greater computing resources, will have a far greater ability to track a larger and broader number of vehicles than any single vehicle is capable of doing. An AA will typically already possess authenticated vehicle information of such a non-managed vehicle prior to a managed vehicle’s awareness of needing such information. The AA could push appropriate information about other vehicles to a managed vehicle prior to the initial contact between those vehicles, thus again reducing the need for larger network capacity for AV’s.

An AA’s authentication (and other endpoint metrics) on a broad and wide basis can help to keep the security ecosystem in a position in which it can maintain current authentication status, identity trust, authorization provileges, trustworthiness, reputation scores and/or other scoring of IoT endpoints, IoT devices groups, vehicles, infrastructure, etc.

Operating on the edge, the TrustCentral Attribute Authority can provide a valuable role by pushing valuable information to vehicles that those vehicles would otherwise have to acquire through V2V, V2I or V2C queries.  This can reduce both bandwidth and processing demands at the vehicle level.

Vehicles are expected to need to communicate individually with many other vehicles and infrastructure to gain identity and other information about them, as well as to authenticate those vehicles and infrastructure in order to determine their trustworthiness.  Efficient use of AA’s can shift a significant portion of those determinations away from vehicle-level resources to AA’s on the edge which can push efficient, summarized, trusted data to vehicles).

AA’s of one network of vehicles (e.g., of one OEM or Government entity) may connect to other AA’s of networks associated with different OEM’s, governments, etc.  Together those AA’s could share information about the respective vehicles for which they are each responsible, into a merged database all supported vehicles and infrastructure (including the location, direction of travel, etc. of those vehicles).  Using sophisticated algorithms and powerful edge computing power, AA’s would be able to reasonably predict what other vehicles that AA’s managed vehicles would encounter.  The AA could then push pertinent information to its vehicles about those other vehicles (e.g., identifying info, trustworthiness, location, speed, direction of travel, etc.).  Thus vehicles could obtain vital information that would otherwise: (a) have to be queried for on a V2V, V2I or V2C basis; and (b) then be evaluated at the vehicle.  A well-designed solution along these lines could resolve a significant portion of the queries that would otherwise be done.